How far are you to Boston Qualifying Time – My analytics attempt 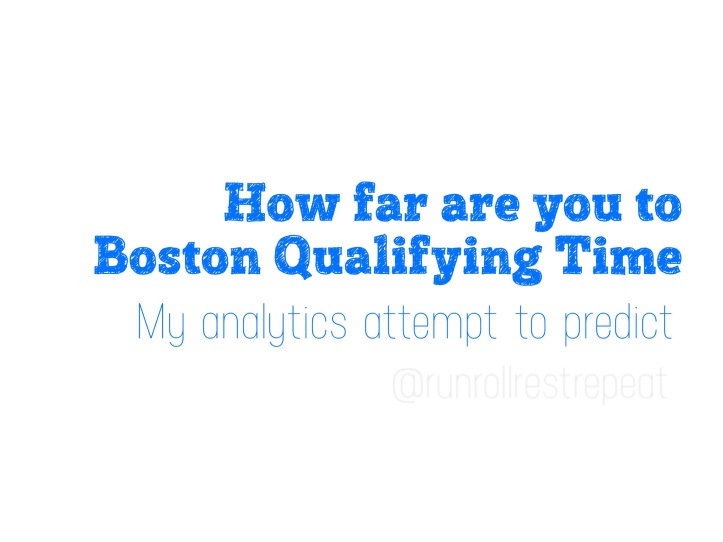 I admire anyone that run Boston Marathon. Especially if you are not a runner growing up, but picked it up as a hobby and now qualified to run BOSTON – all the more respect to you! Its just an amazing thing in the entire world! I understand the whole glamour of Boston had to do with them not being able to accommodate more runners, hence restrict the entry by qualifying time.But we crave something that we have to fight for, and I think that is the glamour of Boston! It has to be earned. Its so in sync with how runners think, to earn something, not to be given. You can’t convince me to get a finisher medal for $10. I would rather pay $100, register and train my behind, to run all those 13 miles to get the same medal. Its the ‘earn’ part.

Last week, my boy friend and I had a little Christmas dinner with few of our close friends. My friend Kristen who I haven’t seen in a longest time, after hearing about my running stories, casually said ‘so what is next… Boston?’. Now I have checked the Boston Qualifying times just like everyone else to see why I shouldn’t dream of such a thing. But since she asked me, I was little intrigued to know and find out what is between my current time and Boston.

See, I am a data guy. Numbers tastes like cupcakes to me. I love numbers and analytics. So I obviously needed to find out even if I could never run Boston, ever in my life, how far I am from even aiming for such a goal.

For this project, this is what I relied on.

How do I read this:

You could use this chart, and figure out where you are currently, and what your gap is. If you already run marathons you know your stuff. But if you are like me, who is just starting, this will be like a google map of your BQ time in the future!

If you have run Boston, do you think this chart reflects of what you were times were when you qualified for Boston? I would like to hear your feedback and tweak this little more!

This is just my attempt , but if you find any value in this please do share! 🙂