We met Liz back in September when we went to cheer a friend of us that was doing the San Diego Tri Classic triathlon competition, representing TeamChallenge. I didn’t know much about  TeamChallenge or what they did at that time, except the fact that we were there cheering our friend, but since then I have learnt a lot about Crohn’s and Colitis Foundation of America, and their TeamChallenge programme, and how participants raise money to find a cure, while participating in Endurance Sports.

Liz is one of the TeamChallenge Member. She talked very passionately about how she completed her triathlon last summer with such a joy and I shared with her, my running. Little did I know behind her smile, behind her triathlon accomplishment – the journey she had to travel through, and the pain and challenges she had to overcome.

As I would learn later, Liz was diagnosed with  with Ulcerative Colitis back in April 2010 at a young age of 21. After suffering through several different symptoms, later in 2013 she got diagnosed with Crohn’s disease. In spite of the disease and the fights to stay active, she went on to train and finish her first triathlon back in 2015. For the kind of person I am, that would take a day off from running even for a common cold, I was moved to my core, hearing this story.

Matt and I volunteered this weekend, at the first inaugural Spin4 event in Orange County along with Liz! With everything that is happening in the world, it was such a good feeling to be around people that fight for a cause, and never let a disease define them. To see how running and endurance sports empower these warriors, not to be defined by a disease is very moving.

Never in million years, have I thought a random hobby of Running I picked up earlier this year, would morph into so much more and teach me and humble me in ways I had never imagined. Everyone is an athlete, but the thing with the obsessions that I see with runners and endurance athletes is in fact, their obsession with potential for more and more life! And I know better never to take a smile for granted, especially Liz’s smile when she talks about her triathlon and endurance sport adventures!

Liz’s team is raising money part of their Spin4 Crohn’s and Colitis Cure. If you want to learn more about Liz and her team, or help further their fight to find a cure, please check Liz’s team page and donate!

To learn more about Spin4 Event check out their page : http://www.ccfa.org/get-involved/spin4.html 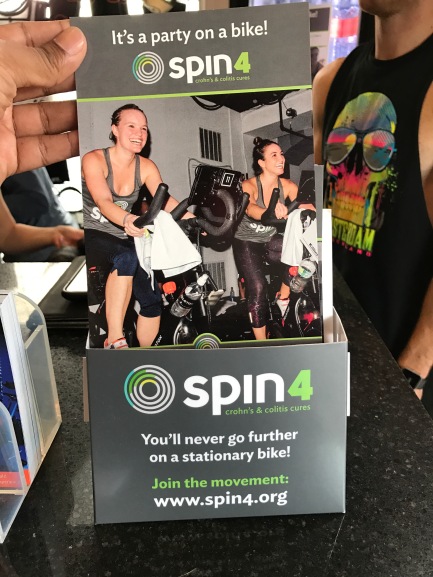