10 things I wish I had known before I started Running 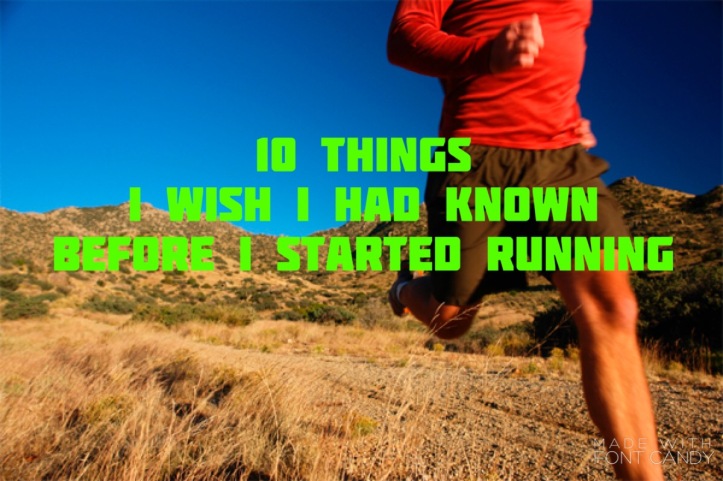 If you can think of a stupid mistake someone could make when they learn to run, I am pretty sure I have made it and most probably learnt from it! This blog is to list out the things I wish I had known before I started to run!

1. Drinking the night before a Race is not a good idea

I used to go to the gym and do GroupX and LesMills Classes all the time. BodyPump and BodyCombat classes especially. We would work out an hour, and then go get a glass of wine or four at times and go home. It was a pretty normal thing for me to drink a bottle of wine and go do BodyPump class the day after. When I started to run, I kind of carried on this, and would indulge myself with few glasses of wine or champagne of some sort, but it didn’t go very well with running the day after! I managed to run, but I was hurting everywhere and I didn’t enjoy the run. Lesson learnt: Don’t drink the day before a race or run. If you don’t take my word for it, here is what google has to say

“Alcohol is a powerful diuretic, and dehydration is never a runner’s friend. The risk for muscle cramps, muscle pulls, muscle strains and general fatigue increases when dehydrated, so drinking extra water after a night of hitting the bars is more than necessary to regulate your body for your next run.”

After few races, I like every other runner, learnt to respect, and appreciate the accessibility to a portable toilet at a race start line! They are life saver. As we eased into winter months, as the race start time of 7 am is still pitch black dark, I realized, Portable Toilets do not any lights inside them. Its dark in there. If you have a disgusting feeling of what you are sitting on or stepping on, its all true. I didn’t have the habit of not carrying my cell phone, so after few ‘dark portable toilet’ experiences, now I make sure I carry some form of light source when I access one of the Portable Toilets if its early morning! Plan around it! Its worth it.

3. You can’t go from running a 5k to running a half marathon over a weekend

See, I didn’t really understand the concept of how running worked, and how important, when someone says training/mileage and everything with running. I thought if I can run 3 miles why not run 13 miles. Little did I know , to go from 3.1 mile to 13.1 mile, I need to increase my weekly runs, no more than 10% a week. Back in May,after a handful of 5ks, I signed up to do a half marathon which I thought was logical, and I did finish running that race at 1:56, ,but I have had grueling few months after with the worst IT Band issue you could imagine. In hind sight, I would have rather trained for 13 miles in may be 8 weeks, and run it better, and be happy about it than hurting myself after the finish line. Lesson learnt: 10% mile age increase per week, and there is no short cut to training!

Running is to go faster, but slow and steady wins the race any day!

4. Learning to run using Youtube doesn’t work quite as much

I have used youtube to make my first pasta dish, and to try out tamil biryani recipe. So when I started to run, I thought youtube will be the place to go and learn how to run. However, the problem was as much as I learnt bits and pieces of techniques, nothing put them together in a format that is easy for me to understand. Everytime I watched a youtube video, I went back to run and tried a new technique and hurt myself more. It wasn’t until I joined Snail’s Pace/South Coast Road Runners/Endurance House Running groups,and started to run with them consistently on weekdays, I have gotten used to better running. Its from people I run with that I have learnt a lot, more so than youtube! Lessons Learnt: When it comes to running, skip youtube, and find a running group as early as possible! Youtube is very helpful to refine the techniques, but not to learn to run.

5. Those Elevation Charts on Race Web Sites – read them!

I ran America’s Finest City Half Marathon in San Diego back in August, and when the mile 11 came, I was taken back by this steep up hill, that seemed like it would last forever. I tried to continue to run, and cramped my calves really bad, and I couldn’t run after that. I had to power walk, so I ended up with a 1:52 finish time instead of 1:50 that I was hoping for. In hindsight, had I read the elevation chart, I would have banked more time 2 to 5 which is a steep downhill, and slowed down on mile 11 which was steep uphill. Oh well. Lesson learnt: when I sign up for a race, check and read elevation chart first!

6. Bladder Trauma is not that uncommon after running on a hot humid day

I never heard of Bladder Trauma, until one day when I went to relieve after my run, all I saw was blood. I have had that symptom once before, back when I was in my teens, when I was on a construction site all day on a hot day ( I never heard of sunscreen until I came to US. I am from India). So with that I knew it had to do with heat, but I didn’t quite understand why after a group run. I wanted to wait and sure enough the symptoms cleared itself, but it did freak me out a bit. I went looking for answers on google, and apparently its not that uncommon to see blood after a hard run, if you running in hot weather, and the key word is ‘dehydrated’ – which  I was. Lessons Learnt: Never run when dehydrated, especially on a hot day. Now I enjoy my winter runs, but I think I will never make that mistake next summer! (For those of you interested in this topic read more here – http://www.runnersworld.com/ask-the-sports-doc/why-do-i-have-blood-in-my-urine-after-running )

7. You can’t tell who runs fast or slow by the way they look

I had been a gym junkie, and when you workout and lift weight, its pretty easy to tell the bloke who has been working out 5 times a day as opposed to someone who doesn’t. Its mostly physical appearance. When it comes to running and endurance, its lot more of internal strength with heart/lungs, and muscle training, than the way the muscle appears on a body builder. When I started to run races, I couldn’t tell who ran fast. I would see a scrawny person in their 60s but oh boy by the time the race was over, he would have logged a 6:50 minute pace a mile. Lesson Learnt: When it comes to running, the training is all internal! You could never judge a runners speed by the way they look!

8. The race day is going to depend on everything you eat and drink , or don’t the day before race and on the day of the race

This I have been learning over the course of several months, and I am still learning. Every food I eat, or don’t seem to have its consequence when the day of the race comes, or when I run in general. I love tacos, but I learnt Tacos aren’t really a running friendly food, atleast for me! Also, I used to takek this GU during my long runs, which had caffeine,and I got super thirsty because of that. Now that is off my list. After reading how important hydration was, I tried to chug a bottle of water right before the race, and ran the whole 5k wanting to pee so bad. Lessons learnt: Plan eating and hydration ahead of time. Try out everything few weeks prior to race. Don’t eat anything spicy(for me personally!). No alcohol what so ever. Eat pretty much the same food that you have eaten for prior races that you know to work! Bland is good! and make sure to have the focus on energy and calories. Bread is your friend!

9. You don’t have to race every run

When I started to run , every time I stepped out of my house, I wanted to do 7:30 pace and I ended up with a 9:00 min pace. But then I go run a 5k somewhere, and my time would be a descent 7:30. I was surprised by this factor for a while, and it took me a while to understand that, training runs don’t have to be race pace all the time. In hind sight, lot of the precautions I take for race day with eating/hydration/rest, I don’t do that for my week day training after a long day at work. In fact, lot of my running group friends that run with me, I never seen them at the race except for the start line. They fly! Lesson learnt: train when you train and race when you race. Don’t mix it up!

I used to train alone, and find races and try to run it, but I didn’t really enjoy running as much as I do, until I joined the running groups and started making friends that I ran with from group runs and races! As much as you work on speed, look around and smile and make friends. Runners are some of the most genuine people I ever gotten to get to know and be friends with! Lessons Learnt: Run for speed, but more so Run with people!