A year of running, Farther and Faster! 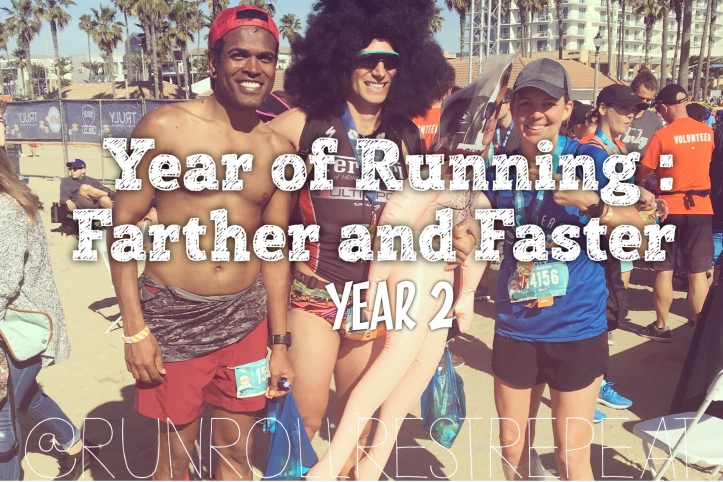 Carlsbad 5000 two weeks ago on March 25th – was my 3rd time running this particular race, and it marks my 2nd year of Running! Back in 2016 I ran this race for the first time, first time running a race in general, and I fell in love with running. It might have been the free beer, free t-shirt, all the people I got to see that day, but running became my passion that day! Since 2016 I have worked on refining my training plan, and fine tune my running mechanics slowly. I haven’t always been consistent, as life gets in the way at times, however, to the most part, I try to get my training miles in each week! I do surround myself with like minded people that are as passionate about running as I do so I don’t let the flame and the fire don’t die out!

My first year of running experience can be read here – A year of Running – One mile at a time! My first year 2016-2017 I focused on improving my training by keeping my miles consistent each week which included my group runs with Snail’s Pace on Wednesdays and with South Coast Road Runners on Monday and Thursdays, and with Endurance House on Tuesday nights. (Spring into Summer Group Run Routes ). I mostly ran on my own on weekends, as I am not an early morning person even tho I do get up super early most everyday for work! My first yearI had gotten use to running half marathons any time even as a last minute notice run! It just became my usual distance. I did focus on my 5k speed at times. At Carlsbad 5000, I ran a sub 7 pace for a 5k(6:56 per mile) which I thought was good for someone that started out running in my 40s on my own that never ran in my life before!

Year 2 of running (2017-2018) was very interesting. I was very much focused on training for a marathon so I signed up to do San Diego Rock N Roll Marathon last year. I also ran into few injuries. After running with Nike Structure for all the time, I thought it would be cool to run with a HOKA ONE, and picked up a pair at the store. However, over the next few weeks and months it would turn out – that shoe caused me plantar fasciitis and also the way the shoe curved in the front, and with my wide feet, it cramped my toes so bad, my runs were terrible. Without realizing what the shoe was causing to my feet, I continued to train and ran San Diego Rock N Roll with a time of 4:10. Not a great time, but I am proud of my first marathon! I struggled, but isn’t that the goal – to learn one self in struggle! I came out of that race with a clear head and a perspective that would guide me in the coming months with such a clarity! After slowing down a little bit after my marathon, right close to holidays I went back to my regular Nike Structure, and sure enough I was able to get back to my regular training. For those of you trying out new shoes, keep your old tried out good shoes still handy, and if you think you are injuring yourself in runs, go back to your regular shoes.

I also learnt a lot about having passion for running, but in the mean time having constraint around how much to go about spending on running. I did run into some financial issues where I had to save money and it gave me a chance to understand my passion for running, but still find ways to not overspend on running races, without giving up on running. Running could be an expensive sport if you aren’t careful! (The Cost of Running & How not to Out Run your Cash!)

I have been logging enough miles over last few months, even though I haven’t been keeping up with my speed work outs.  I wasn’t sure what I would aim for at Carlsbad 5000 this year. However, when I got to Carlsbad that Sunday, I felt my heart was full, and the air was crisp and all I wanted to do was to run and run to my hearts content! I didn’t have any goal time, but after my mile one I realized I was doing about 7:00 or close, so I wanted to stay the same time. 7:00 pace didn’t feel bad. Mile 2 came and another close to 7:00 pace, and knowing it was the last mile, I felt I had so much energy left in me, so I ran one of my fast final mile there. I ended up running 6:51 pace, which still feels surreal. PRs are hard as you run more and more races, and I was so happy to have a sub 7 pace, and a course PR again on this course. Carlsbad 5000 is one of my favorite race, and I can’t wait to come back next year. I am sure I won’t be running best times always, but just running here would make me so much happier!

I started my first race with so many people along with me. Most of them quit, some of them gave up, some of them changed courses, but I am still here running – one mile at a time – one day at a time, and I am glad I chose running every time I had to make a choice. My advise to myself for future is when in doubt, always choose Running over anything else. Running will choose everything else that is right for you and for your life! I do genuinely and strongly believe in that. When I finish that last mile each run, the people that is still standing besides me are the ones that didn’t quit!